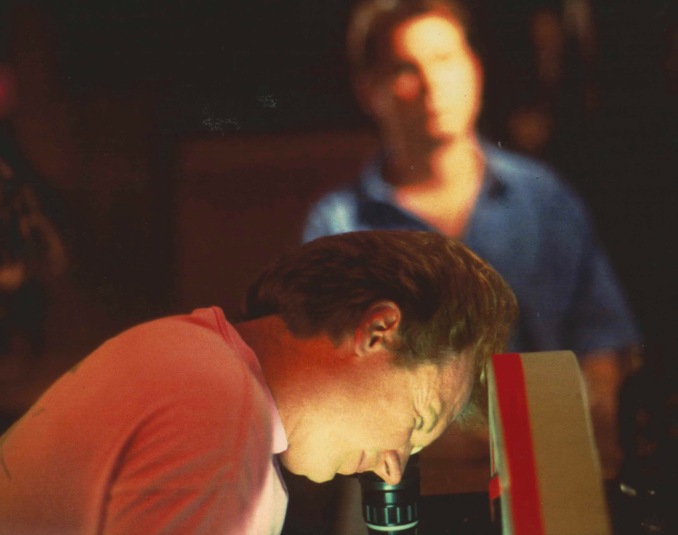 In the early 1990’s I bought myself a computer and the Final Draft screen writing program. I believe the Final Draft program was one of the first version at the time. Now it’s Final Draft 10, which by the way is extremely helpful and straightforward. Years before I wanted to shoot a short film. I was a huge fan of the “Twilight Zone” series. I was also a fan of Hitchcock films. I love the Thriller genre. So, I studied the Twilight Zone series and timed them without commercials. I knew that keeping it short and to the point was very important and I did not want to make a film that was an exercise for actors and their reel, I wanted to tell a story and keep the audience engaged without being distracted. I remember early on the one line I had in my mind I promised myself to use in the film. (I’ll share that later).

So, I had been working in production in the film industry and made quite a number of contacts but never took advantage of it knowing that someday I would need to. I sat in my room and home late at night listening to music that would inspire me to write. I was told by a close friend that each page represented 1 minute of screen time depending on the action. So, that was my first note.

I then reflected on an event that happened to me while I was in the American Academy of Dramatic Arts. I was attending the Academy in the day and worked as a bartender at night. One night, two of the students that were friends of mine came to see me for a few drinks and when I closed the place we sat and talked about the film industry and how important it was to stay friends during our journey. You never know when you need help. My two friends were actors, James Hayden and Michael Kukal. Both very talented. That night we sat at the bar, lights low and the door locked and we made a pact that if one made it, we’d pull the other two in. So, after I completed my studies at the Academy I moved to California and started to chase the dream.

I hadn’t heard from either one of them for about a year and then in the fall of 1983, I reached out and got in touch with Jimmy Hayden. He told me he was on a roll. He had played the lead in the play “A View from the Bridge” and landed a number of television shows. He told me about a film that he had finished titled “Once Upon a Time in America” directed by Sergio Leone, starring Robert De Niro, James Woods, Joe Pesci and Elizabeth McGovern. I was so proud to have a friend that was not only following his dream but making it happen! Then Jimmy told me that our friend Michael had died. I was devastated. We didn’t go into detail about his death but it clearly affected both of us. Jimmy remembered our moments and told me that he had landed the role of “Bobby” in the Broadway play “AMERICAN BUFFALO” with Al Pacino playing “Teach”. Jimmy told me they would be in San Francisco and invited me to see the show. I immediately purchased tickets for me and my girlfriend at the time, she was and still is a very talented actress Tina Carlisi. I was tending bar at a place called Stevie G’s in Studio City and one of the regulars there was an actor named Bernard Erhard. He and I talked about Jimmy and Bernie, as we all called him told me that he played the role of “Teach” in the original opening in 1975 along with William H. Macy who played “Bobby”.

A week or so later, I read the news that Jimmy had died of a heroine overdose. I was devastated once again. Two friends, gone. Ironically, the character Bobby, was an addict. I heard many stories of who he had been hanging around with but I could not believe that this incredibly talented actor and friend was now silenced. In 1984, Mickey Rourke dedicated his performance to Jimmy Hayden in “The Pope of Greenwich Village”.

I held that emotion and feeling in my heart and spent those moments trying to develop the story for “Second Dance”. It was around Christmas when “It’s A Wonderful Life” was playing the last time on every channel there was. I was depressed thinking about my life and what was happening and after watching the movie several times I went right to my computer and began writing.

I knew that I had  to keep the page count down and began with the idea of 5 pages for each act. This would give me a 15 minute film. I wrote, rewrote and rewrote. Spent my Friday and Saturday nights writing. My friends would call saying “let’s go out” and I knew that I had to get this done no matter if it was made into a film or not. There was something that ignited a fire in me and that fire was burning day and night. It was as if I had this friend who would come to life when I turned the computer on. No one else really understood. Everyone was telling me to take some time away and get back to it. But I was on a mission.

I completed the script in about a month and right away started thinking about how I would put a crew together to shoot the film. At the time, everyone was shooting on 35mm. So, I had to get as much film as I could but is was expensive. I had been working in production doing craft service, a job my brother got me in to. He had  said to me, quit bartending and come work with me. You’ll make good money and make great contacts. I accepted the offer and little by little I started to build friendships in the industry.

I was working on the film “Last Action Hero” directed by John McTiernan starring Arnold Schwarzenegger. The Cinematographer was Dean Semler, a very talented DP that I watched every day. Dean had shot the original “Road Warrior”, “Mad Max Beyond Thunderdome”and won the Academy Award for “Dances With Wolves”. I wanted to get to know camera and I wanted to get into Dean’s head.

Every day I would ask him a question about images, what lens to use in certain moments, what filters, anything that would spark an idea for my film. He told me about anamorphic lenses (which I used much later in my career). Dean had a camera assistant by the name of Chris Mosely. Chris and I started talking about my idea for a short film. We talked lighting, camera, framing, we talked about editing and much more. I became friends with the producer Robert E. Relyea and sat in his office many a night getting advice. Advice that I cherish today.

I had $7,000 in my savings. I and decided that this was the moment that I was going to “jump”. I have great support from many friends. One friend who kept me positive was Jay Traynor. He had been in the film industry and we started talking about what was going to follow up with the short. I keep that in mind and Jay was right there to keep me on track.

I met an actor on the street, as most people do living in Los Angeles. His name was Carmen Filpi. Carmen had been a character actor in many films such as “Escape From New York”, “Pee-Wee’s Big Adventure”, “Ed Wood”, just to name a few. I spoke with Carmen and became friends with him. I didn’t run up to him and say “Hey man, I have a film, you should be in it!”. He and I talked about film, we talked about directors he worked with. Carmen was in a film that I thought was exceptional titled “Runaway Train” with Jon Voight and Eric Roberts. I love the performances and the film itself. Carmen asked me what I had going and by that time, I felt comfortable to share it with him. When I told him the story and the back story of how it came about, he was in! He was actually the only familiar face in the short film. Next was building the foundation titled “SECOND DANCE”.

This is a text widget. The Text Widget allows you to add text or HTML to your sidebar. You can use a text widget to display text, links, images, HTML, or a combination of these. Edit them in the Widget section of the Customizer.